He IS taking a swing at it! Trump says he’s the 45th AND 47th president during golf outing in biggest hint yet that he’ll run


Former President Donald Trump said in new video shared online he will be the 47th president of the U.S. – suggesting not only that he’ll run to retake the White House, but that he’ll win.

Trump made the quip at his Trump National golf course in Florida, in a video posted by Breaking911.

The former president can be seen on the first tee of his course as he prepares to hit a drive shot.

‘You’re so lucky to be one up,’ says an unidentified man who has a thick accent and is off camera.

‘First tee. Forty-fifth president of the United States,’ says the man, providing a bit of play-by-play.

‘Forty-fifth and forty-seventh,’ said former President Donald Trump when an admirer on his golf course called him the 45th president

That prompted nearby admirers to clap as the narrator says ‘Yes!’

‘I love that,’ says another man off-camera.

Trump, 75, then hits his ball with his driver, prompting his videographer and another person to each exclaim: ‘Beautiful.’

Trump then follows up with a golf tip. ‘You want to keep it low – that wind’s stronger than you think,’ he says.

Trump, the 45th president, was succeeded by President Joe Biden, the 46th.

Trump has yet to make anything approximating a formal announcement he will run again, although he has made a series of moves suggesting he may, all while strengthening his grip on the Republican Party.

He held a campaign-style rally in Arizona this month, with another planned for Texas Saturday. 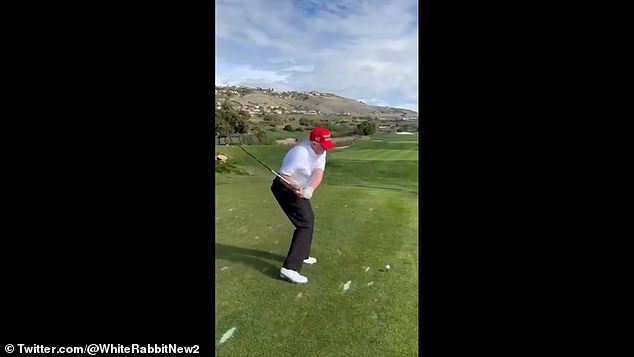 ‘I love that,’ says another man off-camera when Trump predicts he will be back in the White House 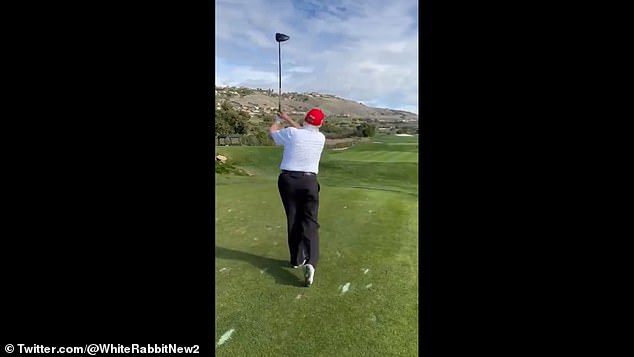 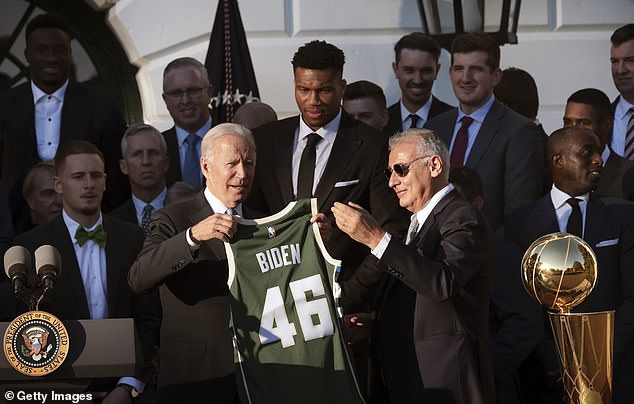 Joe Biden is the 46th president of the U.S. 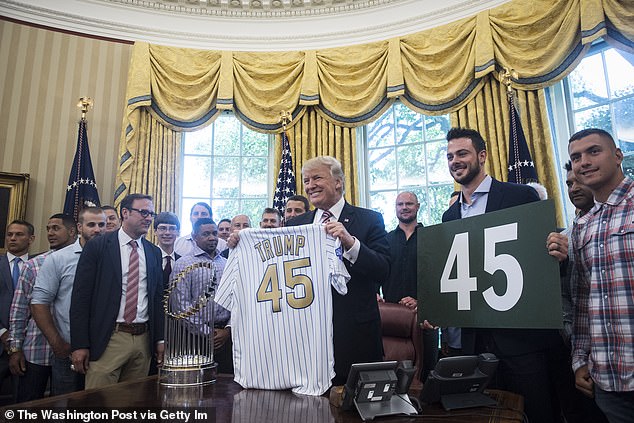 If Trump were to retake the White House, he would be the 47th president as well as the 45th 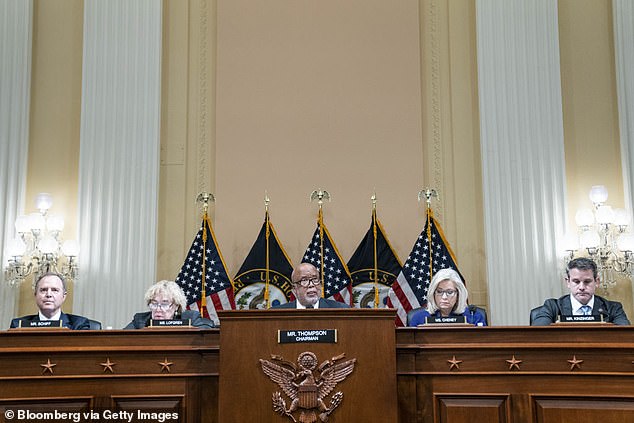 Trump may face an opponent with low approval ratings he takes on Joe Biden in 2024, although he faces his own challenges, including an array of probes

He has repeatedly attacked Biden from his Save America PAC throughout Biden’s presidency. And he he has taken what appear to be swipes at potential GOP presidential rivals – although he called reports of a rift with Florida Republican Gov. Ron DeSantis ‘fake news.’

That came in response to labeling politicians who refuse to reveal whether they have gotten their booster shots ‘gutless.’ Trump himself said he has been vaccinated and boosted, despite a growing anti-vax movement.

Trump’s quip about prevailing in 2024 comes as he faces an array of challenges – even as his successor confronts popularity in the low-40s while dealing with combatting the coronavirus, a stalled legislative agenda, and foreign policy challenges.

The House Jan. 6th Committee continues to demand testimony from key Trump allies and former White House officials as it probes the Capitol riot. New York Attorney General Letitia James is demanding testimony and documents from Trump and his adult children as she continues her civil probe. A prosecutor in Georgia has convened a grand jury in her probe of the election overturn effort.

Federal prosecutors have charged Oath Keepers with seditious conspiracy in their own January 6th probe, and a top DOJ official said Tuesday prosecutors were ‘looking at’ referrals regarding Trump backers who submitted fake vote certifications to the National Archives.

Why Bo-Katan Doesn't Have A Right To The Darksaber

Hannah Tubbs, trans child molester, had string of offenses before arrest for sexual assault of girl