Sex pest Andrew Cuomo wanted Donald Trump to bring his Communications Director Hope Hicks to a meeting so he could ‘creepily stare at her,’ according to the new book by the former president’s chief of staff.

Mark Meadows writes in the upcoming book Chief’s Chief that just before a meeting last year between the disgraced New York governor and Trump, Cuomo made ‘one strange request that would stick out’ – he wanted Hicks in the room.

‘I don’t recall a single question he asked Hope that day,’ Meadows wrote, ‘but I do recall him arranging his chair in such a way that allowed him to creepily stare at her for most of the meeting.’

The alleged seedy request to ogle the former model-turned-Trump confidante came months before Cuomo was found to have sexually harassed 11 women in a damning report filed by New York State Attorney General Letitia James, which led to his resignation in July. 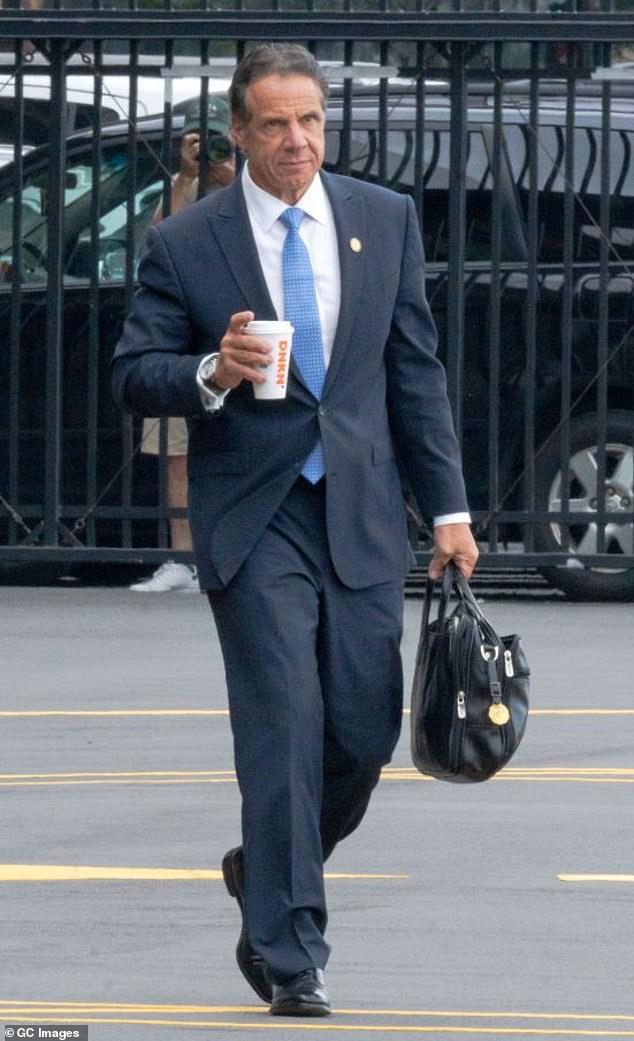 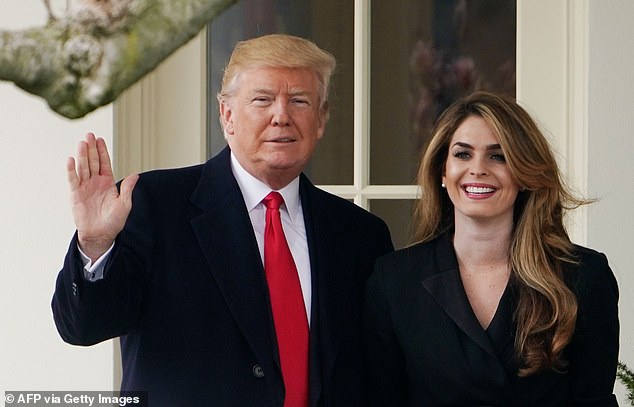 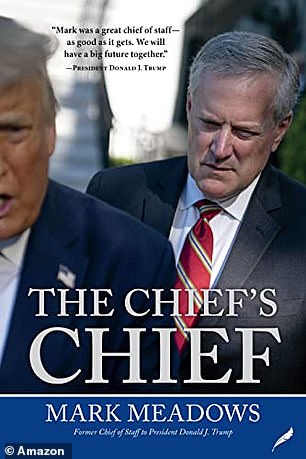 The Chief’s Chief, by former White House Chief of Staff Mark Meadows, will be released December 7

Meadows also accused the defanged Democrat of bashing Trump during his daily COVID briefings, despite periodically calling Trump to thank him for his help in combating the pandemic, according to excerpts obtained by the Daily Beast ahead of the book’s release Tuesday.

The claims are one of many revelations from Meadows’s new book, which include that Trump was infected with COVID-19 before his first debate with Joe Biden and that the law-and-order president wanted to beat up Black Lives Matter protesters who were trying to invade the White House.

Meadows wrote in his book that Trump tested positive on September 26, the day he announced Judge Amy Coney Barrett as his Supreme Court nominee at the Rose Garden, which turned into a super-spreader event.

Two White House aides familiar with the test confirmed it was positive to the Washington Post.

It was six days before Trump tweeted that he was infected with the virus and subsequently hospitalized.

But Meadows wrote in his book that the president tested positive before that despite the fact that the test he mentions was a false positive, which was not mentioned in the book.

He backtracked from his statements during an interview with the conservative Newsmax network, calling his own tale ‘fake news.’

‘If you actually read the book the context of it, that story outlined a false positive. Literally he had a test, had two other tests after that that showed he didn’t have Covid during the debate. And yet the way that the media wants to spin it is certainly to be as negative about Donald Trump as they possibly can, while giving Joe Biden a pass.’

Trump had hit back against his former chief of staff’s claim, also calling it ‘fake news.’

‘The story of me having COVID prior to, or during, the first debate is Fake News,’ Trump wrote in a statement. ‘In fact, a test revealed that I did not have COVID prior to the debate.’

Meadows said Trump’s initial test had been done using an old model kit and so the president was tested again using ‘the Binax system, and that we were hoping the first test was a false positive.’

The second test came back negative, with Trump taking that as ‘full permission to press on as if nothing had happened.’

Both tests were rapid tests.

At the time of their showdown in Cleveland on September 29, Trump was 74 years old, while Biden was 77. 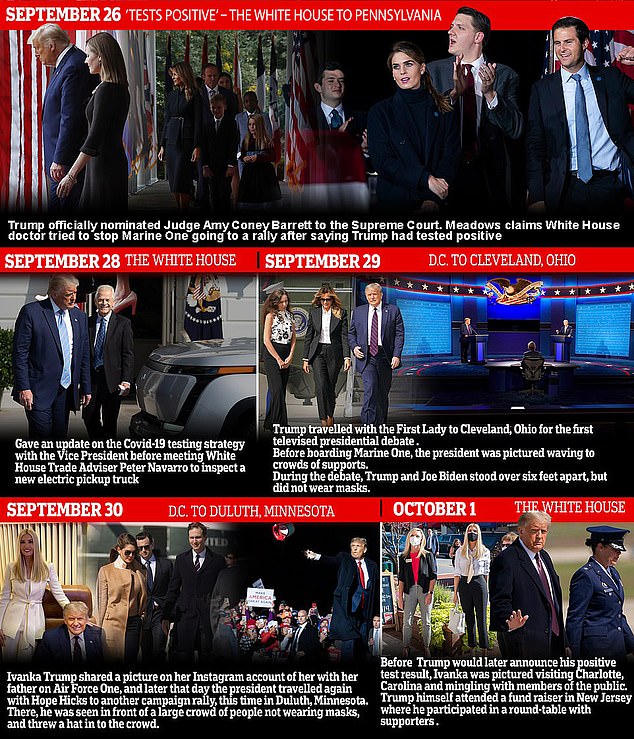 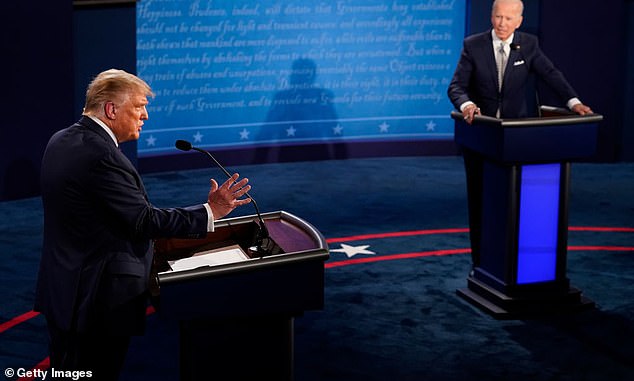 Biden dismissed a question about whether his health was put at risk but Trump.

‘I don’t think about the former president,’ Biden said.

Trump went on to announce that he had COVID-19 in the early hours of October 2, three days after his debate with Biden.

The White House said the then-president announced the positive result within an hour of receiving it.

Meadows also wrote that Trump would have taken the law into his own hands if BLM protesters broke into the White House during a rally last year and would have ‘knocked their heads in.’ 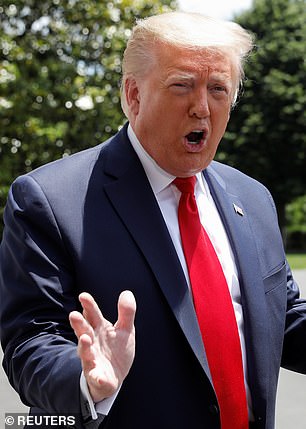 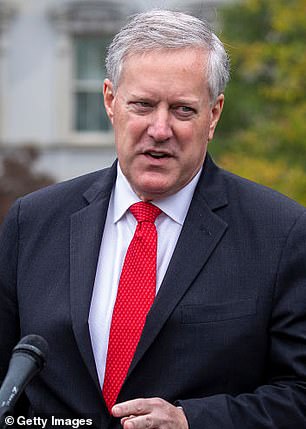 President Trump (left) would likely have taken the law into his own hands as BLM protesters closed in on the White House in May last year, according former Chief of Staff Mark Meadows, and ‘knocked their heads in one by one,’ he writes in his new book 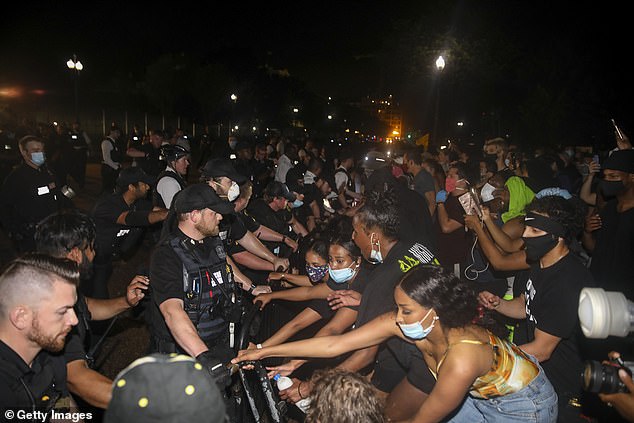 Trump was ushered into the White House bunker as protesters swarmed the grounds outside Pennsylvania Avenue. Trump has denied he was afraid of the protesters and wanted to inspect the bumper.

‘A few hours later, the White House entered Code Red. Protesters had jumped the fence on the Treasury side of the compound, and they were running toward the Oval Office,’ writes Meadows, according to excerpts obtained by the Daily Beast.

‘I’m sure that if President Trump had the choice, he would have headed out to the lawns and knocked their heads in one by one.

‘But he didn’t have a choice. When it comes to the United States Secret Service, no one does. Either you do what they say, or they pick you up and make you do it.

‘He knew that he could go to the bunker with a few agents by his side, or he could go on their shoulders kicking and screaming. For everyone’s sake the first option was better.’

Details of his trip to the bunker quickly leaked to The New York Times.

What time is Hawkeye episode 4 released on Disney Plus?